Tribute to Lord Kerr of Tonaghmore 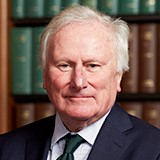 Sir Declan Morgan, Lord Chief Justice of Northern Ireland, has paid tribute to his former colleague and predecessor, Lord Kerr of Tonaghmore who died today at the age of 72:

“I had the benefit of serving under Brian Kerr as a High Court Judge during his tenure as Lord Chief Justice of Northern Ireland.  He held judicial office for 27 years, moving from the High Court bench, to the Court of Appeal as Lord Chief Justice; from there to being the last Lord of Appeal in Ordinary in the House of Lords to becoming the youngest of the justices in the newly formed Supreme Court.  Judicial Office is an independent one, where decisions must be made individually and frequent periods of working alone are demanded.  This was true for Brian too but his ability to support, inspire and assist colleagues and support staff alike was immeasurable.

Brian Kerr’s service to society was outstanding and the body of jurisprudence he leaves will continue to inform and benefit us for many years.  A significant proportion of his judgments were dissenting – always questioning and thoroughly independently minded.  It was my honour to have been his colleague and friend.  My sympathy and that of my colleagues is extended to his wife Gillian, his sons and their families.”